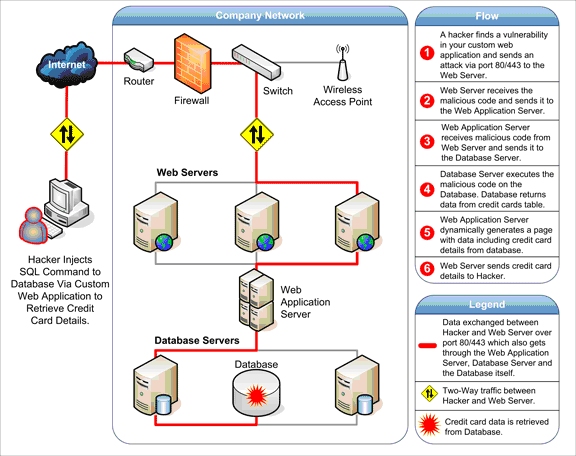 In the last few years, an unlimited number of enterprises have embraced the web platform as an inexpensive channel for promoting their business and contacting customers. In particular, the web offers a convenient way for companies to get to know people visiting their websites and begin communicating with them. It is also a great sales channel for many organizations with more than 1 billion active users.

However, along with the massive adoption of web services, the number of web application attacks and security exploits rapidly grew. And because these attacks and cybersecurity threats are becoming increasingly common, it becomes a priority for all organizations to know what they are up against, how to secure their web apps, and how to mitigate security risks.

The article below will help you to uncover all these aspects and get acquainted with the most widespread types of web application attacks.

What are Web Application Attacks?

Every web-based app on the Internet has all the chances to become a sweet target for malicious attacks and data breaches. The existing threats range from a simple human error to more advanced web attacks coordinated by cyber criminals. So whether you run a small, simple business website or an e-commerce project, your web application security should be a priority, as the risk of encountering a potential malicious attack is always there.

Web applications can be exposed to hacks for various reasons, such as misconfigured web servers, improper coding, application design flaws, and failure to validate them. All these security vulnerabilities enable attackers to gain access to company databases and churn sensitive data. Even the so-called script kiddies term is used to describe such types of attackers.

Sometimes, with various cyber attacks going around, it seems impossible to defend yourself against all vulnerabilities. Still, you can do multiple things to secure your website and prevent web application attacks, including regularly performed Android and IOS penetration testing, security testing, and automated vulnerability scanning.

In general, web applications can be hacked through various attack vectors. We gathered the most common web application attacks all security teams should be aware of below.

Distributed Denial of Service attack is a way to temporarily or permanently render the website offline. The primary goal of a DDoS attack is to overwhelm the company’s web server and prevent legitimate visitors from direct access with many requests, making the website unavailable temporarily. A botnet generally creates numerous requests and distributes them among the previously infected computers and content management systems. DDoS attacks are combined with a different type of web application attack.

Protecting your web apps against a DDoS attack requires a multifaceted approach. In the first step, you need to mitigate vulnerabilities in the traffic through a Content Delivery Network and a load balancer. Next, it’s time to deploy a WAF ( Web Application Firewalls) if the attack hides another cyberattack method, like XSS or an injection.

This web application attack is most common among websites that haven’t encrypted their valuable data as it travels from users to the web application server. Generally, as a user, you can easily identify potential risks by reviewing the web site’s URL and checking if it begins with HTTPS – “s,” indicating that the site and data are encrypted.

Hackers use a man-in-the-middle attack to collect sensitive information and access unauthorized files. The attacker intercepts the data between the involved parties while it’s being transferred. So, if the data lacks encryption, the hacker can easily access login, personal, or other private details that go from one location to another on the Internet.

The most simple way to fight against a man-in-the-middle attack is to download and install an SSL (Secure Sockets Layer) certificate on your company site. It encrypts all the data and information of the site, so attackers won’t easily get the hang of it or trick users.

Cross-Site Scripting Attack is one of the most widespread web application attacks. It has taken almost 40% of all cybersecurity attacks till now. However, even though XSS attacks are the most frequent type, most of these attacks are performed by amateur cybercriminals using already created scripts from others.

An XSS attack usually targets the users of a website rather than the web app itself. Typically, a malicious actor inserts a piece of malicious code into a vulnerable site that a visitor executes. This infectious code can easily compromise the user’s accounts, modify the website content, or activate a Trojan horse to trick him into giving out private data.

You can set up a web application firewall to protect yourself against XSS attacks and cross-site request forgery. WAF is a filter that detects and blocks any malicious requests to your site.

According to OWASP, injection flaws are the highest risk for sites and web applications. And the SQL injection method is the most widespread practice in this category among cybercriminals.

SQL injections target the site and the web server’s content database to exploit applications. Once executed, the hacker inserts a code that reveals user input and hidden data, allows data modification, and compromises the web application.

You can protect your website against such injection attacks with a properly built codebase and secure development testing. For instance, the core way to mitigate SQL injections’ risk is to use parameterized statements, among other methods. Moreover, you can also use a third-party authentication workflow for outsourcing your database protection.

There are two core scenarios of how hackers can benefit from a zero-day attack.

In the case of both options, your security gets compromised, while the subsequent damage level will depend on the attacker’s skills. The simplest way to protect your web applications against such targeted attacks is to upgrade your software right after a new version is prompted.

What are the types of attacks on a web application?

What are application attacks?

What is a web-based attack called?

Application layer attacks refer to all methods malicious hackers use to gain access to a web server or cause a data breach. These include identifying and exploiting vulnerabilities in coding during the development lifecycle, using malicious script code to steal data, executing a successful path traversal, etc.